03 Nov GeekWire: ‘MeowTalk,’ an app that translates cat sounds, is a pet project for this former Alexa engineer

This article was originally written by GeekWire reporter Kurt Schlosser, published on GeekWire. 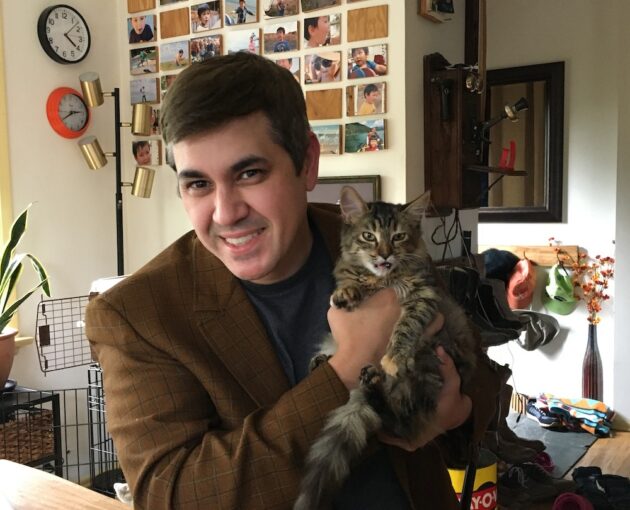 Plenty of technological advances may be regarded as the cat’s meow. Here’s one that claims to actually understand what cats are saying.

Javier Sanchez, a technical program manager at Bellevue, Wash.-based business and tech solutions company Akvelon, has built a cat translation app called “MeowTalk” that he hopes will change how people interact with their feline friends.

Using data science and machine learning, MeowTalk listens to the sounds a cat makes and offers up a human language translation, promising to remove the barrier between pet and person on interactions ranging from “feed me” to “let me outside” to “I’m in pain.” With user input, an out-of-the-box version of the app can be trained to understand a specific cat.

For Sanchez, it’s another chance to work with voice technology — even if that voice is just meowing.

“I worked in the machine learning platform team at Alexa for a while,” said Sanchez, who spent a year and a half at Amazon. “And I got to see how the sausage was made, how they train their models and work with all the data science platforms. So I was fresh off the heels of that and I was thinking, ‘Well, we could do something similar with cats and it could be an app.’”

Sanchez got the green light for his pet project at Akvelon four or five months ago. He takes seriously the connection between cat lovers and their feline companions, especially during the pandemic and quarantine when a lot of people are confined to their homes and those relationships are vital.

“A tool like this can help certain people bond even more with their cats, especially if they can’t be in contact with other people on a regular basis,” Sanchez said. “So this could be a real game changer for a key demographic that have cats.” 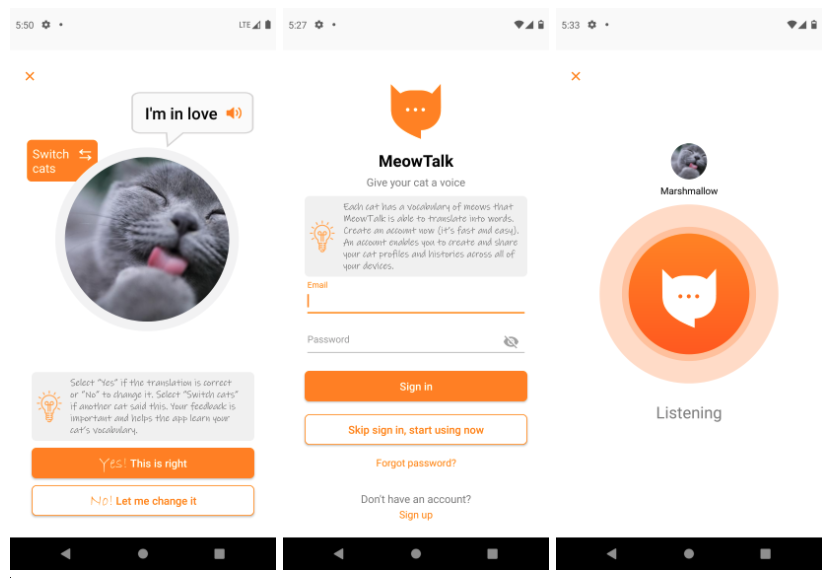 MeowTalk (on iOS and Android) comes with a general model that listens for cat meows in your home and then categorizes those sounds into 10 built-in intents that are universal to all cats. The first time I launched and tested the app, our family’s cat Luna meowed, and the app returned “mommy” as the translation, even though Luna was clearly waiting for a treat.

While cats don’t have a shared language, each will develop their own vocabulary that they will use consistently, Sanchez said. Users can create cat profiles and assign meows to new labels in MeowTalk when they think they know what their cat is asking for.

The app will learn a new word and will make accurate predictions for that word the next time it hears it. Behind the scenes, user feedback is training the cat-specific model to understand that cat’s meows going forward.

The idea gets interesting as more layers and scenarios are combined with added technical capabilities, such as a smart collar that’s in the works. The collar, in early prototype stage at Akvelon, would hear the meow and play back a human voice translating what the cat said. Or, if the cat is outside and needs to be let in, the meow would trigger the collar to send a text message to a human inside.

Sanchez consulted with a data scientist named Stavros Ntalampiras, who wrote a research paper that got the attention of the Akvelon team, called “Automatic Classification of Cat Vocalizations Emitted in Different Contexts.” Akvelon data scientist Danny Kosmin is also working on the project, and he wrote a Medium post describing the technology.

MeowTalk relies on a Google data science model that hears a cat meow and knows it’s a cat meow; a general model that provides the app’s initial cat vocabulary intents; and the very specific model which is trained for each cat.

“The real ingenuity behind this is tying all that together, getting that to run instantaneously on a phone. That was hard,” Sanchez said. “It’s like a mini version of Alexa to pull this off and make it work.”

Amazon’s voice-enabled artificial intelligence is plenty smart, but it’s not in the business of translating cat language. Alexa can make cat sounds and get the attention of a cat in the house — based on our own testing — but Sanchez said Amazon is more interested in the business of human speech and spoken syllables.

“You could meow at it all day. There’s no API for it,” he said of Alexa. “They don’t care about cats.”

Sanchez has been a cat person the majority of his life. As one of his cats circled his office as a test subject during a recent Zoom video call, he said dogs, while they definitely understand speech, just don’t have the same vocal capabilities to communicate through their barks.

“The joke I tell people is that dogs can understand human language, but they don’t speak it,” Sanchez said. “Cats don’t care what you say. Maybe they do understand you, but they certainly don’t indicate that they do, but they clearly do have their own vocabulary.”

Akvelon, employs 800 people worldwide, including 150 between the tech hubs of Seattle and Silicon Valley. It provides software engineering solutions to companies such as Microsoft, Reddit, DoorDash and more.

The company wasn’t setting out to make a cat translation app to fill any customer or market demand, or to make money. Sanchez said his product just fits into a company culture that encourages creativity and exploring new avenues.

“It’s a tool that demonstrates our technical fortitude within the company,” he said. “We’re a technology company. We want to build these things and share them with the world.”

This article was originally written by GeekWire reporter Kurt Schlosser, published on GeekWire on November 3rd, 2020.

“Cats don’t care what you say. Maybe they do understand you, but they certainly don’t indicate that they do, but they clearly do have their own vocabulary.”